When I was taking Spanish 1001, Dr. Zamostny came to our class to give us some info on a  study abroad trip to Costa Rica for the following May. I sat and listened and when it was over I jokingly texted my brother asking if he thought I should try to actually go on the trip. I say "jokingly" because I never honestly thought that seven months later I'd be sitting on a plane with 21 other students flying to another country to take Spanish classes. Let me back up a bit though, because one does not simply end up on a plane that is destined to leave the country; it takes work, a little bit of convincing a lot of people, and about $5,000. 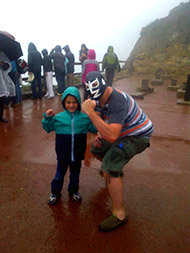 When I first heard how much the trip was I was about ready to quit right then and there. $5,000? I'm a broke college kid; I don't have that kind of money, or even a job to make that kind of money. Even after I was told by the directors about how the fee was broken down and how much when where, that didn't change the amount. Naturally, I was a little discouraged but I thought I'd look into things and see if I could get a loan somewhere or something. First I talked to financial aid about whether Pell Grant would help; unfortunately, my Pell Grant was maxed out for the year from that Fall and Spring semester, but I was able to increase my accepted student loan amount to help pay for my deposit for the trip. I still needed to come up with about $4,500 but at least I had temporarily secured my spot on the trip for the time being. Next, I tried to see if I could take out a private loan through my bank, however, they told me that because I didn't have a job or a reassuring amount of money in my checking account that there wasn't really anything they could do unless I got someone to co-sign on the loan with me. This wasn't looking good.

I was chatting with a friend of mine about the trip and how actually getting accepted to go on it had finally given me an idea as to what I want to do once I finally finish school; I said that if I could make it to Costa Rica that I'd pursue a minor in Spanish and get certified to teach English as a foreign language. He told me that that sounded like a wonderful idea but I expressed my worries about not being able to come up with the money and that things weren't looking good and he gave me some of the most outrageous advice that I'd heard yet.

"Ask your friends and family. If you are serious about this, they will help you more than you think."

Crazy talk! That wouldn't work! People just don't give other people large sums of money, even if they are family!

I mulled this idea over in my head for a few days and got to thinking. I've always loved cooking for my friends and family, so instead of just asking for money why not hold some sort of lunch benefit? But what could I make? When I realized how obvious the answer was I started researching typical Costa Rican food, threw a menu together, created a Facebook event, and invited everyone on my "friends list" to "Pearce's Costa Rican Taco Benefit". I learned pretty quickly, however, that tacos didn't seem to be hugely popular in Costa Rica, but they are delicious nonetheless and I needed a main dish to serve.

Food prep started the night before the event when I baked a tres leches cake at midnight and threw together some rubs and marinades for my beef and pork to absorb before cooking would resume in the morning. I returned to my kitchen work at 7 a.m. and eight hours of non-stop cooking later my house was full of my friends, family, and some really delicious food. To the excitement of everyone's stomachs I gave to go ahead to dig in and I just sat down for a little while. The menu consisted of gallo pinto (Costa Rica's national dish), 6 pounds of pulled pork and shredded beef for tacos, roasted corn salsa, tres leches cake, bolitas de coco, rum flavored short bread cookies with toasted coconut and dulce de leche, and sangria. Everything made by me from scratch; from the dulce de leche that I drizzled over the cookies, to the whipped cream on the tres leches cake. I just sat there, surrounded by the people I most cared about, all smiling and laughing. A lot of them had never met one another, but I was able to bring all of the most important people in my life together with this food and this goal in mind; to get to go to Costa Rica. Every now and then someone would walk up to me and give me an envelope or slip me cash in hand and I'd thank them and they would tell me how delicious everything was. I was asked by the majority of them for the recipe or told that I had to come to their house and cook all of this again for them before I left, and I laughed and told them I only had the recipe for the cake and that I did everything else on the fly, but I said I'd try and they said it would be good regardless. Once everyone had left I finally counted the money people gave me and all in all, I made $1,100. I was stunned. I felt I would only make a few hundred, not $1,100!

I feel like one of the most important aspects to my benefit was that I told everyone that was interested in coming that they were not obligated at all to donate anything to me; if they wanted to, awesome, but if not, they still got some delicious food to eat for free. Instead, every single people that came ended up giving me money, and I was grateful for every single penny; some only gave $20-$30 while other gave me more. The gratitude I had, and still have, for all of those people and what they did for me still cannot be expressed. Every one of them that helped me did so with a common goal in mind, and that was to help me get to Costa Rica.

As you read, I was able to go to Costa Rica and it was one of the most amazing experiences of my life. I'm still a bit amazed that I was able to visit and I absolutely could not have done it alone (though, hopefully I'll be able to self-fund it the next time I decide to visit). The moral of the story, kids, is that if you truly want something bad enough, you will have a support system there to help you obtain it even if you don't realize it at first. Sometimes all you have to do is ask.